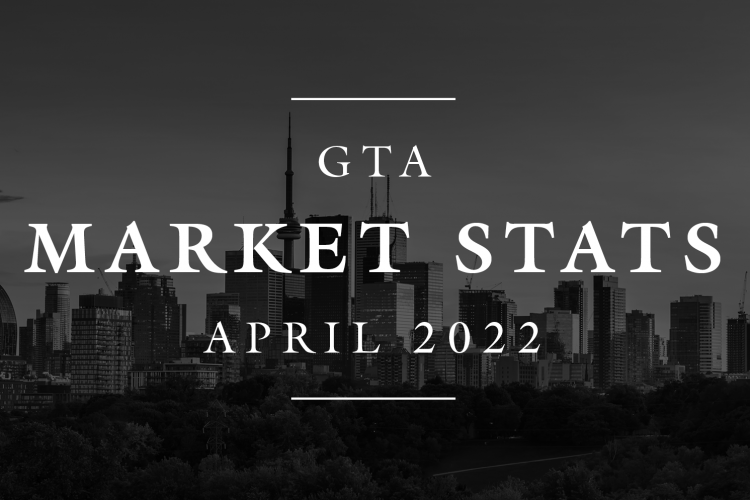 TORONTO, ONTARIO, MAY 4, 2022 – The Greater Toronto Area (GTA) housing market continued its adjustment to higher borrowing costs, with the number of transactions down on a monthly and annual basis. As has been the case with previous rate tightening cycles, some home buyers have moved to the sidelines to determine how they will reposition themselves in the marketplace given the higher rate environment and related impact on affordability. “Based on the trends observed in the April housing market, it certainly appears that the Bank of Canada is achieving its goal of slowing consumer spending as it fights high inflation. Negotiated mortgage rates rose sharply over the past four weeks, prompting some buyers to delay their purchase. Moving forward, it will be interesting to see the balance the Bank of Canada strikes between combatting inflation versus stunting economic growth and related government revenues as we continue to recover from and pay for pandemic-related programs,” said TRREB President Kevin Crigger. 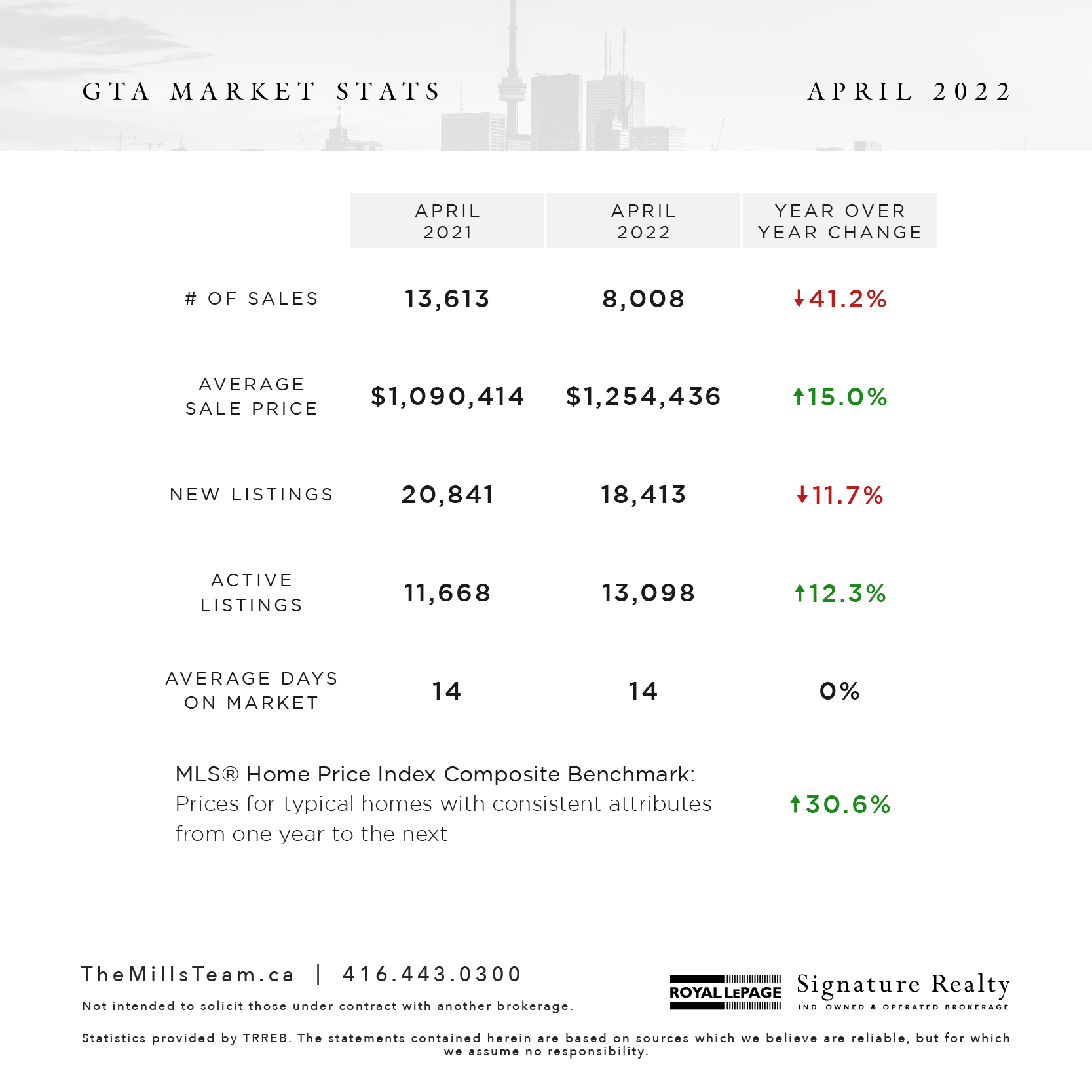 GTA REALTORS® reported 8,008 homes sold through TRREB’s MLS® System in April 2022 – a 41.2 per cent decrease compared to April 2021 and a 27 per cent decrease compared to March 2022. On a year-over-year basis, the decline in sales was greater in the ‘905’ area code regions surrounding Toronto, particularly for detached houses. The MLS® Home Price Index Composite Benchmark was up by 30.6 per cent year-over-year in April 2022. The benchmark level in April was down in comparison to the March level. The average selling price, at $1,254,436, was up by 15 per cent compared to April 2021, but down compared to the average selling price of $1,300,082 in March 2022. 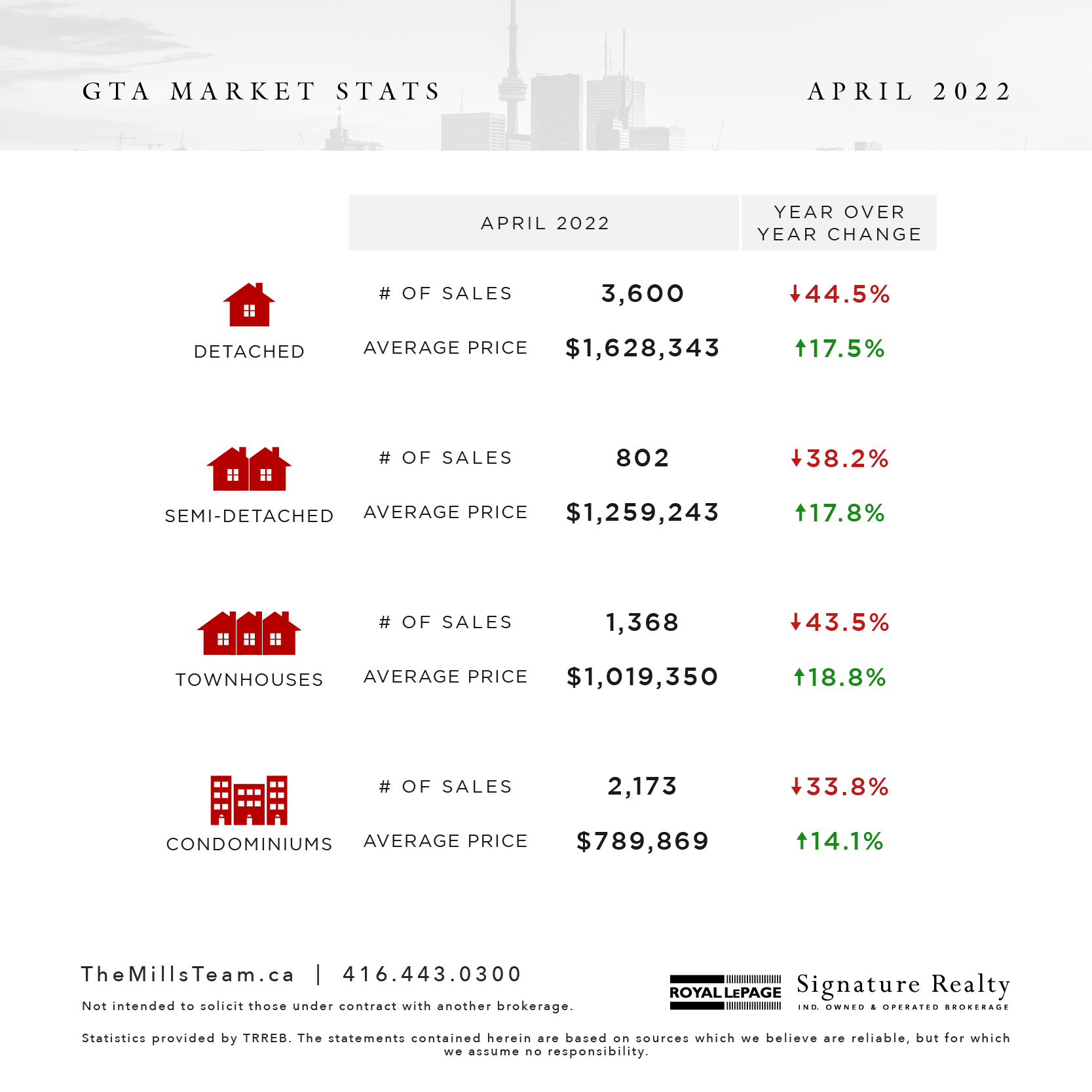 “Despite slower sales, market conditions remained tight enough to support higher selling prices compared to last year. However, in line with TRREB’s forecast, there is evidence of buyers responding to increased choice in the marketplace, with the average and benchmark prices dipping month-over-month. It is anticipated that there will be enough competition between buyers to support continued price growth relative to 2021, but the annual pace of growth will moderate in the coming months,” said TRREB Chief Market Analyst Jason Mercer. 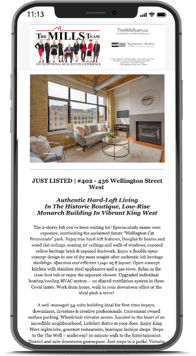